Australia is often called the Lucky Country, but is it really?

With approximately 25 million people and a landscape that is equivalent to the size of the United States, we should be living in paradise. Australia is one of the oldest countries on earth and our original inhabitants; the Aboriginal people have been living here sustainably for nearly 60,000 years. The British settled Australia 200 years ago and since that time, there has been a shocking history of both flora and fauna to extinction, including the Tasmanian Tiger in 1936. The worst of all however was the decimation of the Aboriginal people and their sustainable way of life. It is a shocking indictment on western culture and our current and former political leaders should hang their heads in shame. They have said “Sorry”, but do they really mean it?

Matilda has diverse literary interests and she was raised on books like the “Glugs of Gosh”, “Blinky Bill”, “The Magic Pudding” and May Gibbs works. It created a great love of country and all things in nature. She was also raised by parents who respected and understood the great suffering of the original inhabitants and were ahead of their time in their reverence for the environment

Can anyone imagine destroying Stone Henge at around 5000 years old? Yet a “grinding groove” estimated to be over 10,000 years old in a forest in NSW is treated with impunity. Matilda was particularly inspired by Norman Lindsay. Like Norman Lindsay (who painted himself as a Koala in his last portrait). Matilda thinks the Koala is a marvellous representation of the Australian spirit. Norman as a satirist in the early twentieth century was known to characterise the problems of the nation with a wonderful and inspirational cartoons. He clearly saw the Koala as a symbol of Australia; all things good and all things bad. Matilda does too and it is why she believes the Koala cannot vanish from our shores.

Imagine Australia without the Koala. And it could happen. Both Matilda and the writers knew that Australians, although under British law are different. Original immigrants who came to live here either as free settlers or convicts came to love and admire this rough and difficult landscape. Dorothy McKellar wrote “I Love a Sunburnt Country” which articulates the rugged nature of a landscape.

Australians can be slightly irreverent; or even completely irreverent. When overseas we sing “Waltzing Matilda”, our nations real anthem with gusto; we are slightly cheeky and Matilda will go on the road with that spirit in mind…

Matilda is seeking out the larrikin in all Australians and better still she wants the people of Australia to tell our political leaders that they are in charge, not them. 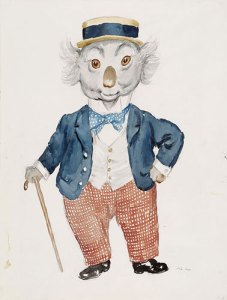 Matilda wants Australian politicians to realise that they are responsible to us and that we deserve both respect and admiration about the choices we make when we vote for our parliaments. Currently our leaders are captive to industry, political donations, jobs for the boys in the pre-selection process and the voter comes last.

Matilda knows that Koalas, each with individual personalities are the average Australian. Bunyip Bluegum in Lindsay’s Magic Pudding articulates that and as he journeyed around Australia in the company of the “come again, come again pudding” which a grumpy old pudding called Albert they marvelled at the immense wealth and abundance our Australia.

It is true Australia is rich in both landscape and resources. But maybe it will end.

Our Great Barrier Reef  is under immense pressure and scientists agree that unless climate change is halted, that one of the great wonders of the world may disappear, some say, by 2025. This is not far away and on the news each night people talk about this fact, but do not truly understand what it means. What does that actually mean? And at cost? The cost will be immense, not just in dollars from tourism but in ecological collapse which will takes centuries to fix, if ever.

Matilda has a lot of Tasmanian relatives and in the 2016 one of the most important forests of the world was destroyed forever and because it is in the middle of Tasmania, we hear of it on the news, but it does not sink in to our minds and souls.

Is the “come again pudding” being depleted by industry on a daily basis and have we gone too far with our economic rationalism so that we lose sight of the beauty of the country and the way of life that all should enjoy.  Matilda says yes, it is being depleted and we are going to live in a quarry sooner than later unless we reign in industry to a more sustainable way of being.

Matilda and her supporters are tired of seeing everything she loves destroyed in the name of “the economy”. Even in her short life she has watched magnificent landscapes diminished and worse still legislation fail to protect any biodiversity on any species.

GET SOCIAL WITH MATILDA